On January 9, 1916 the movie «Fatty and Mabel adrift» with Roscoe Arbuckle and Mabel Normand was released by Keystone Films.  The movie was directed by Arbuckle and is quite different from the crude and grotesque slapstick comedy that director Mack Sennett was used to film for the studio. 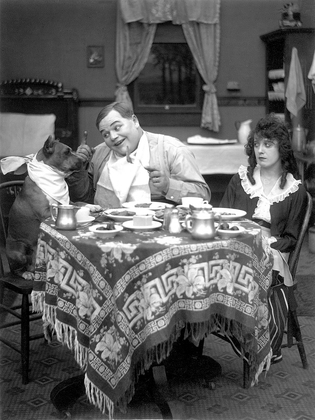 The fun starts on the farm, where Fatty (Roscoe Arbuckle), merely a working man, loves Mabel (Mabel Normand), his employer’s daughter. His rival (Al St. John) from the adjoining place is not to be consoled after the two lovers have been married.

They move to the seashore, to a small house that was sold to Mabel’s parents by a crook that knew that it was too close to shore.  There the villain pursues them, enlisting the aid of Brutus Bombastic and his two not-too-bright crew members to accomplish his wicked ends. Brutus chews dynamite, drinks gasoline and lights his cigar with a gun and is very much of a wretch.

Unaware of what is happening, one of the most beautiful moments in silent film history takes place, when Roscoe’s silhouette bends down to kiss Mabel, who is asleep in bed, their dog curled up next to her.

The villain and Brutus nasty hirelings shove Fatty’s bungalow off into the stormy seas in the dead of night, and husband and wife wake up in the morning to find their beds floating about in water. Luckily they are accompanied by a very clever dog, who goes for help, and this situation serves to introduce the Keystone police, who are funnier than ever before. Attempting to launch a row- boat through a heavy surf is the chief comedy scene of theirs.

Finally, the Mabel’s parents come to the rescue while the villain and Brutus Bombastic and his men are killed after Brutus throws his cigar into the dynamite by accident after a poker game discussion.

Rural rivalry which continues from the farm to the seashore is the subject of this excellent Keystone featuring Roscoe Arbuckle and Mabel Normand. It is original in its climax while the story in which the rivals do battle for Mabel’s hand and love does much more than affect its audience in a humorous way. It has suspense enough to do justice to a strong dramatic offering. Laughter and tears are closely allied, and in «Fatty and Mabel Adrift» one is at times very apt to grow serious and wish that the villainous rival would disappear forever.

Fatty and Mabel appear so happy with one another that the third party’s presence comes very near to being unwelcome. This situation, however, occurs infrequently, but just often enough to create a strong contrast with the hilarious parts of the story, emphasizing the comical points to an unusual degree.

Contrast is a valuable element in comedy, and this subject is clear proof of that. On the farm much that is funny is introduced. Fatty blows up au automobile tire with his lungs, and the milking of the cow, an old-time trick, has been made hugely funny and not at all offensive. Excellent direction is obvious in the latter scenes when Fatty and Mabel wake up to discover themselves floating about in the rooms of their house.

Fine photography and some of the best light effects seen in many a day mark the release. Scenes with the sun setting over the water, the figures silhouetted against the sky, aid in creating those serious moments of the film. Other pictures show the rough waves breaking over the rocks and sending up showers of spray. And ships pass by in the path of a searchlight. Director Arbuckle has made a formidable record with his effects in this picture.

Of the supporting cast, Al. Si. John as the acrobatic villain deserves most praise. He has often been seen in smaller parts in Keystones, but this is his first big role. He is really funny both in makeup and actions. Others are Frank Hayes. May Wells, Wayland Trask, James Bryant, Joe Bordeau and Glen Cavender.